Pioneers and Building the Choir

@STILLTish.GenderAbolition deconstructs this 7m interview, published two years ago, only a couple of weeks before the Georgia Green Party amended its platform to wade into this very debate on the side of the children being subjected to Mengele-like experimentation.

"Linehan is probably correct in his assessment that this interview was not a serious attempt to address the concerns he, and many others, were raising. However it felt, at the time, I think he has been vindicated and Sarah Smith should be haunted by her role. Imagine if so many journalists had not failed to do their job? Had this been stopped at the time of this interview maybe the reckless prescribing, currently harming my son, would have been stopped."

Earlier in this piece, she had written:

"Also, to feminists like Janice Raymond and Sheila Jeffries, I am a Jane-Come-Lately and, no doubt they are, justifiably, irritated their pioneering work gets less mainstream attention, than it should. In the end I suspect the media will amplify whichever voices they find more palatable / moderate, to the frustration of us all."

But none of us need apologize for being Johnnie and Jane-Come-Lately's. If you reached peak-trans only this morning, your voice is just as vital to our success as is the fore-mothers on whose shoulders we stand. Without the "Transexual Empire" and "Gender Hurts" and so many of their other pioneering work, none of us would be here. And without our efforts to amplify that pioneering work, their prescient insights would have been lost to personal book collections discarded to the curb as the heirs of deceased feminists disposed of property they were too ignorant to appreciate and were unable to move in estate sales.

But the good news is, that the tide is turning.  And more and more of wake up to these abuses every day.

Together we will win!

She her full commentary here:
https://gendercriticalwoman.blog/2022/08/20/graham-linehan-on-newsnight/

and while you are on her site, consider checking out some of her other research.

Thank you. A recent fatwa published by the islamic Council of North America has made an important contribution to the conversation. And a far cry more appropriate reading on the matter than an earlier one touching on these subjects by the Ayatollah Khomeini (Islamic Republic of Iran).  Gender Critical Greens, particularly those who are not themselves Muslim, will surely take issue with some or much of Dr. Qahdi's analysis.  Nonetheless, we can all celebrate the addition to this conversation by as large and influencial an organization as ICNA.

Matt Walsh has a Sense of Humor: It's out now -- What is a Woman? 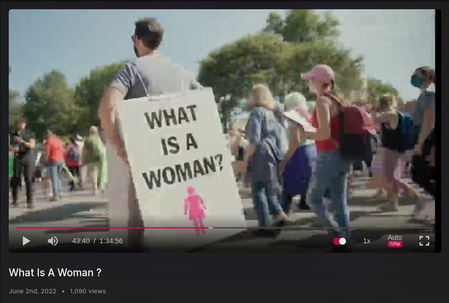 Matt Walsh's documentary is out. His politics are not Green politics, but on some questions we might find ourselves aligned. The man has a sense of humor.
In this 90 minute film, he managed to get many spokespeople for gender ideology across multiple 'disciplines' to go on camera and answer his questions. At least they answered his questions until they stopped, refusing to continue to humiliate themselves by how poorly prepared they were to defend the positions they advocated.  I was not counting while watching, but having just completed this show, I recall at least four individuals who while on camera advised him that his interview with them was over.

Its been pretty clear to any of us who have critically examined gender ideology to any extent, that there is no there, there.

To be feminist has always meant to be a gender abolitionist I just spent the ten minutes required to read this though. Feminism has always been gender critical: Historical feminists knew better than anyone that biological sex is real is worth at least ten minutes of your time as well.  If you have ever been frustrated by the poseurs claiming their 'intersectional feminist' credentials to defend the empowering experience available to young women who dance on a pole for the male gaze, or defend the feelings of men claiming to be women hurt by the fact that women might assert their privacy and dignity as trumping the narcissism of those men, you will particularly enjoy this piece.

The problem with rebranding feminism “gender critical feminism” — much like rebranding women “cis women” — is that it turns our most essential social and political concepts into mere subcategories of broader, looser concepts defined by others. Moreover, such a rebranding repositions feminism as a response to trans activism, denying the longstanding nature of feminism’s rejection of gender. It denies us our legacy, making it that much easier for outsiders to claim women such as Allison Bailey and Mary Wollstonecraft have nothing in common. This is just not true.

But this article otherwise sheds much needed light in its discussion of an effort, international in scope by the lobby for gender ideology, to capture public education institutions. It cites specifically a document called the "National Sex Education Standards" (local copy). This 'standards' document was developed not by the US DoE, as its title might suggest, but by political advocates aligned with the gender lobby. It is now required by state school board guidance for New Jersey public schools starting with the next academic year.

It is safe to assume that the with a title claiming to articulate national standards, and content advancing the goals of the gender lobby, that advocates have no intention of stopping with New Jersey. And in that effort they have engaged the help of advocates concerned for interpersonal violence and others whose conception of age-appropriate sex and relationship education are likely to be supported by greens and feminists.

In short, its a tangled mess.

Authorized and Paid for by the